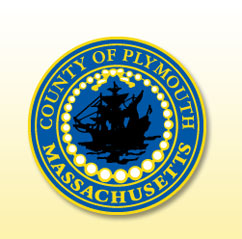 The seal was designed to truly represent the County of Plymouth and it shows the Mayflower at rest after landing her passengers on Plymouth Rock in 1620. Her hull is reflected in the water as she swings at anchor in the quiet harbor; the cargo has been unloaded; “On a stern and rockbound coast a new nation has been born.”

Around the Mayflower is a chaplet of pearls 27 in number, each representing the municipalities now bound together in county government; each complete in itself but united in the score and more of government functions which are better carried on by the county. The value of the chaplet is in the value of its individual pearls, yet worth is not determined by size alone – the smallest being the Town of Plympton and the largest being the City of Brockton.

The County of Plymouth was established on June 2, 1685 by the General Court of Plimoth Colony.

In 2018 Sheriff McDonald updated the original patch design to omit the “ Dept.” in a transition to Sheriff’s Office, one of the oldest Sheriff’s Offices in the County. Plymouth, Massachusetts is nicknamed “Americas Hometown".

Although the Department does not allow patches out to the General Public, we will trade or swap to other Public Safety agencies and their employees for collection or display purposes.